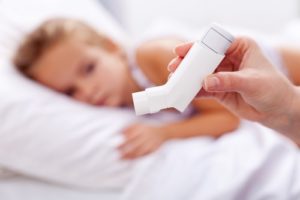 Dr. Alami is an established and knowledgeable doctor, has consistently remained among the top tier of pediatricians in the greater Lubbock area as one of the very best pediatrician in Lubbock. Dr. Alami is also known around the greater Lubbock area by parents of asthma-stricken children as the go-to practitioner for child asthma treatment in Lubbock.

Further, Dr. Alami is also highly skilled in reacting quickly to cases of child asthma attack emergency, a technique he has used to save the lives of several asthmatic children who suffered asthma attacks when they weren’t being supervised, didn’t have access to emergency inhalers, or were in other unfavorable situations.

What Is An Asthma Attack?
First, we should define what asthma is. Without going into technical details, asthma is a chronic, lifelong condition that is hallmarked by inflamed ducts, passages, and tubes in the respiratory system that causes difficulties in the transportation of oxygen into the lungs.

An asthma attack is a severe, acute flare-up of symptoms that causes the chest to feel tight, people to be short of breath, coughing, and wheezing. In severe manifestations of these asthma attacks, sometimes referred to as asthma exacerbation, sufferers may find themselves unable to breathe at all.

Keep in mind that asthma attacks can range from being mild and nothing more than an inconvenience to being a full-fledged child asthma attack emergency.

How Are Asthma Attacks Dealt With?
Since severe exacerbations of this respiratory disease can cause serious medical issues, purely responsive treatments are generally the last course of action. Preventative forms of treatment, of which there are several, are considered the gold standard in dealing with asthma.

Rather, physicians work to understand their patients’ unique groupings of symptoms when they undergo breathing problems as a result of their respiratory disease. Ultimately, physicians are responsible for crafting fine-tuned treatment plans that are to be followed as soon as flare-ups are recognized.

How Can One Differentiate Between Simple Flare-Ups And Full-On Attacks?
Asthma attacks are often characterized by severe feelings of shortness of breath and chest tightness. Such chest tension often leads to pain ranging anywhere from mild to severe.

People with asthma should always have a peak expiratory flow reader near to them. If people suffering from asthma flare-ups test their readings and find that their peak expiratory flow is at a low level, they should progress with the latter steps described in their customized asthma attack treatment plans. If that reading does not reach a low level, the sufferer in question might simply be going through a flare-up.

Another way to tell the difference between asthma attacks and basic flare-ups is to gauge how well rescue inhalers improve their symptoms after flare-ups start to tiptoe into the realm of being considered asthma exacerbations.

It’s important to note that asthmatic patients whose symptoms do not improve within minutes of administering their prescribed rescue inhalers should immediately travel to whichever hospital’s emergency room is closest to wherever they are at that point of time.

What Are The Direct Causes Of Asthma Exacerbations?
Asthma is similar to allergies in that the condition is set off by triggers like pollen, mold, pet dander, existing upper respiratory infections, smoking or being exposed to tobacco or marijuana smoke, taking in generous amounts of cold air, and stress.

An effective means of preventing asthma attacks from occurring is wearing tight-fitting dust masks during spring and summer months, as well as staying inside whenever it’s cold outdoors or there’s too much pollen out there.

Dr. Alami is an Expert Asmtha Specialist
Dr. Alama is well-known as one of the best pediatrician in Lubbock for all things related to asthma, allergies, and breathing troubles of all severities. Dr. Alami is a provider of arguably the best child asthma treatment in Lubbock.

With more than 26 years of experience as a practitioner under his belt, 26 years of of instructing clinical labs at the Texas Tech University Health Sciences Center, and several combined decades in tenure across the boards of directors at a number of highly important medical associations, Dr. Alami is more than qualified to treat any diagnosed or expected asthmatic child or adolescent.

Dr. Alami Kids- All About Kids © 2016 All Rights Reserved

All about kids offers and maintain this web site to provide information of a general nature about the practice and conditions requiring the services of pediatrics. The information is provided with the understanding that All Bbout Kids is not engaged in rendering surgical or medical advice or recommendations. Any information in the publications, messages, posting, or articles on the web site should not be considered a substitute for consultation with your pediatrician to address individual medical needs. Individual facts and circumstances will determine the treatment that is most appropriate.